Was reminded of the Langi flats in Toorak when checking out the National Trust Trees Iphone App.

Walter Burley Griffin designed the building in 1925/26 for property developer Mary Williams. They were called mansion flats, based on London or American models. Radical for the time. The horizontal eaves place the building low in the landscape.

The Griffins were pioneers because they liked to consider the landscape when they designed. There’s a great little newspaper article from the Argus in 1930 which describes his visit to Daylesford in country Victoria to advise council on the beautification of the new lake and springs reserve.

‘In his plan of the ideal Daylesford he would include 90 percent of native flora. He also said the landscape resembled Canberra, which was one of the most colourful he knows, because of the wide background of blue ranges and cloud effects on extensive fields and forests.’

Walter’s wife, Marion Mahoney Griffin, was thought to have planted The National Trust registered lemon scented gums out the front of the Langi flats. 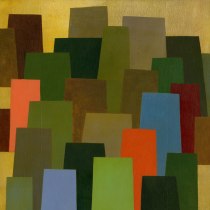