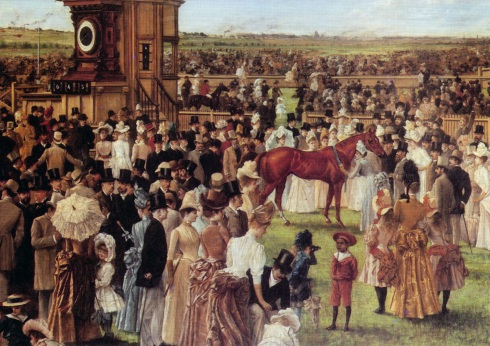 Controversial though by the looks of this letter to The Argus dated January 1888.

Sir – My attention has just been drawn to a statement which has appeared in several Victorian journals that I had canvassed for and received money from people for painting the portraits into my picture of “The Melbourne Cup.” Will you permit me to state, through the medium of your columns, that such a statement is as groundless as it is injurious. I have never asked or been offered and shall never accept any remuneration from the persons who appear in any picture of “The Melbourne Cup Series.” My object has been to depict as faithfully as in me lay one of the greatest sights in the world, and I have done this for the sake of art and art alone. And it is most gratifying to me to learn that the people of Victoria have, by their attendance at the exhibition of my work, and by their subscriptions for the photogravure of it, shown that they appreciate my poor endeavour to represent on canvas their great carnival. Carl Kahler